Developing a Dungeon-Building algorithm has been a personal project for quite a while, but I've always spent more time writing the code than thinking of the theory. Unsurprisingly, I ended up writing inefficient, boring tunelling algorithms.

In this blog post, we will dive into the subject and try to develop a new idea, from the theory to the implementation in C.

The algorithm should generate random maps suitable for a Roguelike game. Generated maps should not necessarily be composed of interconnected rooms like NetHack does: They could also look like caverns or mines, e.g. the ones used in Cavern or Possession.

suitable for a roguelike game means that generated maps should be connected (connected as in graph theory: each point of the map should be accessible to the player).

Furthermore, the algorithm should be scalable (it should work fine on low power devices but should also take advantage of more powerful machines) and modular (it should be possible to generate a variety of maps using the same code base). 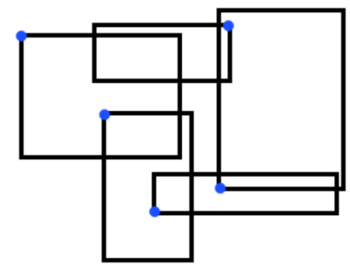 Any map generated in this way is necessarily connected since we always choose the next initial point in the previously generated room. It is inplace because we don't need any buffer, which is a very interesting quality for embedded devices.

Also, we can be sure that the algorithm ends. In fact, as long as the desired size is smaller than the map, there will always be 'enough place to fill', and even if the algorithm may loop some time over previously marked points, it will always 'find' the remaining unmarked coordinates. I didn't try to find its worst case bound, but it could be interesting to do it.

I have implemented the algorithm in C for the following reasons:

I have written two generate_room() functions which allow the generation of rectangular and elliptic rooms.

The implementation is certainly perfectible, but for the moment it does the job in a sufficiently efficient way. You can find the source code on GitHub.

You can find some examples of generated maps here, with different parameters.

The arguments of the fill_map function are interesting for modularity and scalability.

room_size allows control over the maximal size of generated rooms. Small values will produce fine-grained maps, at the cost of a higher computational overhead (more loop cycles are required to achieve the desired filling). On the other hand, the filling_coefficient variable allows control over the map's filling (for example a filling coefficient of 0.9 will produce a map which will have at most 10% of empty space).

Together, these two parameters allow to generate maps with a pre-defined filling lower bound regardless of the available hardware, with room_size being the variable parameter. Please note that high values of room_size do have an impact on the final result. We will discuss this point later.

The following chart represents the average number of CPU cycles needed to generate a map, in relation to the value of room_size (with filling_coefficient constant 0.4). 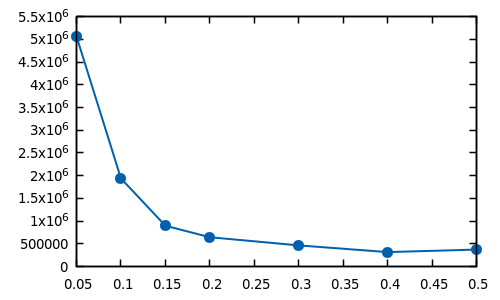 As you can see, the computational overhead increases exponentially as room_size approaches zero. This is because the probability that a newly generated room is fully included in the already filled space is higher when room_size is small.

In fact, running the current C implementation with room_size = 0.05 on modern personal computers is fast (1-2ms in average with a core i5-5200U). On (very?) low power devices however, the higher computational overhead might be a problem. For that reason, it would be a good idea to study the effects of room_size on the final result, in order to maximize it and make computation costs as small as possible with the best map quality possible.

Lessons I learned from the C implementation:

These results are of course only experimental and potentially subjective. Interested users may have to play around with the parameters to find the most appropriated ones for their specific usages.

You can find some result examples here with the algorithm using only rectangular/elliptic room generators.

In the end, this algorithm works well. It is fully usable and produces very nice results for small values of room_size. generate_room() may be studied further to find optimal solutions, but this is not critical as long as the implementation is run on modern hardware.

I'm probably going to work on other blog posts about random map generation. I think it is a very interesting subject and I have other ideas I'd still like to develop. For example, I've thought of generating a big map and then randomly removing parts of it until we reach the desired size.

In this case it would be fairly easy to guarantee the connection property, since the map can be represented as a graph, with each coordinates being a node: Using graph theory we can make sure that removing a node won't dis-connect the graph, for example by removing leaves of its spanning tree.

This algorithm would have a linear worst case bound.

I have used Valgrind and kcachegrind as profiling tools.